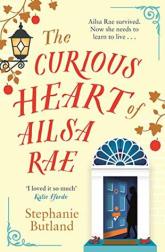 The Curious Case of Ailsa Rae by Stephanie Butland
Pub. Date: October 29, 2019
Source: e-ARC via publisher (Thank you, St. Martin’s Griffin!)
Summary: Ailsa Rae is learning how to live. She’s only a few months past the heart transplant that—just in time—saved her life. Now, finally, she can be a normal twenty-eight-year-old. She can climb a mountain. Dance. Wait in line all day for tickets to Wimbledon.

But first, she has to put one foot in front of the other. So far, things are as bloody complicated as ever. Her relationship with her mother is at a breaking point and she wants to find her father. Then there’s Lennox, whom Ailsa loved and lost. Will she ever find love again?

Her new heart is a bold heart. She just needs to learn to listen to it. From the hospital to her childhood home, on social media and IRL, Ailsa will embark on a journey about what it means to be, and feel, alive. How do we learn to be brave, to accept defeat, to dare to dream?

Twenty-eight-year old Ailsa Rae has never moved out of her mother’s flat. She barely graduated college. She’s never held a job. Until recently, Ailsa didn’t know if she would live to see the following day. Born with a heart condition that was a death sentence to babies born just a few years before her, Ailsa has spent more time in the hospital than out, has been through multiple surgeries, and has blue-tinged skin as a result of the lack of oxygen her body is receiving.

Everything miraculously changes when she receives the news she never expected to hear: she’s going to receive a heart. That someone had to die so that she could live is something Ailsa tries not to dwell on; instead she blogs. Blogs about life in the hospital, blogs about her condition, blogs about her dearest friend – her first boyfriend – who recently lost his own battle. But now that she’s suddenly received the gift of life, what is she going to do? What do you do when you never expected to see tomorrow, let alone a lifetime from now?

The initial chapters left me hesitant. I honestly wasn’t sure I even wanted to continue with the book. Ailsa comes across so much younger than her 28 years – but I realized that’s completely understandable. She never got to experience a normal childhood, her time at college consisted of what she termed “after parties,” hot tea in the morning while her friends detailed everything she missed the night before. Her mother is practically attached to Ailsa’s hip (again, understandable, as she’s spent nearly three decades expecting her daughter to die any day). She’s never had a job, never been more than a few hours away from home in case of an emergency. Naturally she would have led an extremely sheltered life.

Once I pushed through those beginning chapters, however, I breezed through this book during a workday (shh!) That this 400+ page novel was such a quick and engaging read that I was able to read it while working should definitely say something! I think it certainly helps that the majority of the novel is comprised of Ailsa’s blog posts.

After receiving an award for her blog, Ailsa is invited to do a radio appearance and meets a fellow transplantee: a wildly famous (aka unknown to Ailsa), ridiculously good-looking actor named Sebastian, who until recently was on a Dancing with the Stars-esque show. He blew off an itch in his eye as nothing, a bit of dirt perhaps, until it got worse. Seb nearly lost his eye, were it not for a cornea transplant.

A friendship slowly develops between the pair: Seb is able to be just a regular guy, Ailsa is free to share her worries and complaints (just because she has a new chance at life doesn’t mean she’s happy every waking minute). Their friendship-turned-romance was really sweet and Seb genuinely seemed to care for Ailsa, despite tabloids pointing out he could have his pick of any model.

Tango lessons, a production of Romeo and Juliet, flashbacks of time with Lennox in the hospital, and learning how to become an adult all received plenty of screen time so to speak. One subplot I didn’t care for was Ailsa’s search for her biological father. She never knew him growing up and once she learned she was actually going to have a future, she decided to track him down. I really didn’t care about this, especially when the end result was so lackluster. The other aspects of the story, however, were great.

Don’t let the size of The Curious Heart of Ailsa Rae scare you off: it’s an extremely fast read that I was able to get through in a sitting. While at work! Blog entries, newspaper articles, and emails all make this a breeze of a novel. While I could have done without one major subplot, I enjoyed the time I spent with these characters – though any time Ailsa’s condition was highlighted, I kept thinking of Diane Chamberlain’s The Dream Daughter, one of my favorites of 2018 and a novel that also featured a daughter with a fatal heart condition. Despite the age of the characters, I can easily see The Curious Heart of Ailsa Rae appealing to a YA audience, due to both the voice and subject matter: growing up, first love, and hospital romances seem to be a favorite trope of the genre.