Is it just me or is September the Month of Awesome Books?! Seriously, there are so. many. fantastic books coming out this month and I had the hardest time narrowing it down to just these!

You might have heard of a little novel called Cloud Atlas. Yep, that David Mitchell. Before it was even released The Bone Clocks was a nominee for the Man Booker Longlist – that’s definitely saying something! Part sci-fi, part literary fiction, The Bone Clocks follows 15-year-old Holly Sykes after running out on her old life. See, what sets Holly apart from other teenage runaways is that Holly can hears voices; she’s a one-way link between our world and something else. Those voices she’s hearing? They not only affect Holly and her reality, but they also alter the course of her descendants. I’m not at all surprised by the glowing praise this book has already received!

The Wonder of All Things is Jason’s follow-up to The Returned, a book I had received but never got around to reading (I definitely need to fix that now!). A tragedy at an air show leads to a 13-year-old girl being thrust in the spotlight. Dozens of spectators are killed or injured – including Ava’s best friend Wash. When rescuers manage to find the pair, Ava has her hands placed on Wash’s wounds…and they heal. Suddenly people the world over flock to Ava’s hometown, looking to be healed, not realizing that each healing takes its toll on the girl.

I’m a big fan of historical fiction. BIG fan. The Lightkeeper’s Wife takes the reader to Cape Cod in the 1800s on the night of a bad shipwreck. Hannah’s husband, the lightkeeper, is out of town and though she’s been forbidden from heading to the water (it’s a man’s job, after all), she feels compelled to help. She’s able to save one of the men and while he’s recuperating, she discovers he’s not at all what she assumed. An early review sort of spoiled that part for me (if I’m guessing correctly – and I think I am), but I’m still very intrigued! 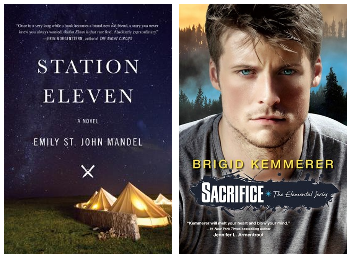 The night the world begins to end, an actor dies onstage during a performance of King Lear. In the hours that follow, a descent begins and, fifteen years later, the world is nothing more than a wasteland. Station Eleven bounces back and forth through time and perspectives (one of my all-time favorite narrative devices!) – each one somehow connected to that Shakespearean actor. Although I’m not a huge fan of dystopia/post-apocalyptic novels, I have high hopes for this one!

Sacrifice is one I desperately want to read as well as put it off as long as possible. Its release ends the Elemental series and I’m just not ready to say good-bye! These books are one-sitting reads and I simply LOVE the world Brigid created, the Elemental powers, and of course, the boys. At this point there are 6 or 7 of them and I love each one. Even better is that each book follows a different boy, so we get a look at things from HIS perspective. Sacrifice follows my favorite, Michael, the oldest of the Merrick boys. This is going to be a hard one for me, guys! If you’re interested in the rest of the series (and you should be!), you can check out my reviews for all four books + a side story!

My favorite sub-genre of historical fiction are the stories that take a minor character (sibling/secretary/etc) and allow them to tell their side of the story. Not surprisingly, Juliet’s Nurse follows Juliet’s nurse. While I wasn’t super in love with Romeo and Juliet in high school, I have a weak spot for retellings!

Bitter Greens in another retelling – this time involving Rapunzel and the court of King Louis XIV. Um yes. It might be considered cheating a bit, since I already have this one and will be part of the book tour (be sure to keep an eye out for my review!) but it sounds WAY too good to pass up!

I love me some Civil War. Neverhome (which I included in that post!) is a book that’s so up my alley it should be retitled Leah. A farmer’s wife, disguised as a man, leaves home to fight for the Union and that’s all I needed to know to be instantly enamored.

Have you read any of these? What September releases are YOU looking forward to??